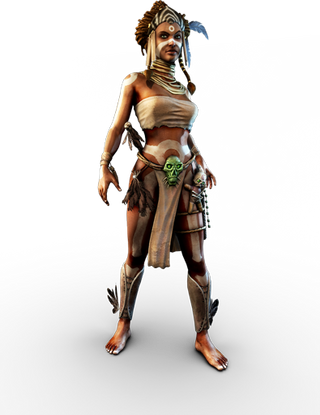 Courageous and full of pride, Chani is the daughter of the chief of the Shaganumbi tribe.

Chani has spent her entire life in the village of the Earthclan, and despises the expansion plans of the Inquisition, and the appearance of marauding pirates in her home.

As a strong-minded voodoo witch with a gift in magical talents, she is dedicated to the protection of her people. She defends with the strength of the people of her tribe against the dangers and rise of evil within and outside the community.

The "nameless hero" meets Chani on his travels; she shows him that "savages" are perfectly able to defend themselves against invaders!

Chani is torn between seeing the "nameless hero" as a threat to her and her people and deciding if he is her only hope in helping her stop the evil that lies ahead.