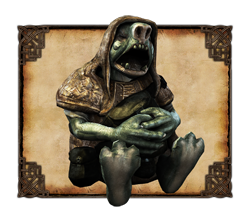 Gnomes are small creatures native to the Faraga Islands. Ever since human beings first set foot on the Faranga Islands many years ago, the native gnomes have been notorious 'troublemakers'. They are known to steal and pickpocket possessions from humans.

Don't be fooled by their small sizes. These pesky creatures can become of an annoyance. They normally come in groups of three or four, sometimes accompanied by a chieftan. From a distance, they'll throw projectiles at you, such as clubs, knives and beer bottles. They can dodge your attacks quite often and can perform one quick jump attack. You'll need a shield to block most of their attacks, including their projectiles that are thrown at you. You'll especially need to be aware of the chieftan. While it's attacks are the same for a regular gnome, it has more health and does more damage.

Strength
Have ranged and melee attacks. They are always in groups and can overwhelm you.

Weakness
Very vulnerable to counter attacks. Block their attacks then attack when they stop.