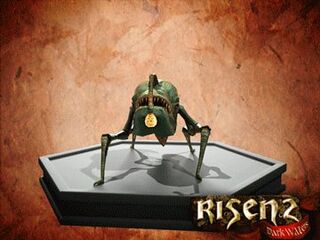 The Sand Devil is a horrendous small, yet tenacious beast in Risen 2: Dark Waters.

The player first encounters one in the very beginning of the game while saving Patty.

Deep Silver describes them as follows:

These disgusting creatures emerge from the hidden depths of the sea and lie in wait for their prey, primarily in sandy terrain. They are not particularly large, but what they lack in size they make up for in numbers by appearing in packs. Once a victim is surrounded by a group of Sand Devils there will be no escape. The helpless prey is wrestled to the ground via lightning-fast attacks and mercilessly slaughtered by the bloodthirsty pack. Even for the most experienced of fighters, these stubborn beasts are a real threat who must be encountered with great caution and determination.

Their glowing lanterns have an incredible appeal and entice food as well as careless adventurers. When viewed for a longer period of time, it almost seems as if one is being observed by this shimmering ball. Its fast movements and sharp, razor-like rows of teeth make it a nasty harbinger of what other creatures could rise from the abyss. [1]

Found on most beaches on the Southern Islands, usually in groups of three or four.